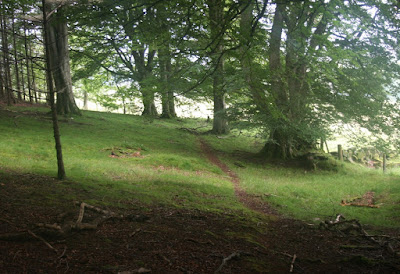 This essay by Alan MacPherson describes a community using a gentle or minor walk to renew a minor path.

It was originally published as booklet by Deveron Projects. It was written during a writing and research residency investigating the relationship between walking and art in Huntly over a two month period during the summer of 2012.

Thanks to Alan and Deveron projects for allowing it to be republished here. 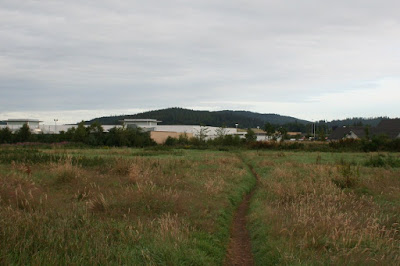 Many times I walked over the bridge on Bogie Street in Huntly, going to or coming from the station. Invariably I looked over the side at the water and followed its course back towards the Bleachfield bridge; always hoping that I might catch a glimpse of a fish.

With no visible path along this stretch of the river, it was just out of sheer inquisitiveness that my wife and I, one night, decided to see if we could make our way along the bank. We found the old gate at the bottom corner of the playpark at the corner of Gladstone Road and Bleachfield Street and, it being stuck, squeezed through between the gate and the post and picked our way downstream. In places there was a visible track but at several points, along what is only a 400 metre section, it disappeared. It was April, and the undergrowth was still down, but even still, as we neared the Bogie Street end we were just tramping over undefined ground. Any trace of a path that connected these two points along the river had been overcome by regrowth or washed into the river with the bank in a previous flood.

In The Old Ways: A Journey on Foot Robert Macfarlane writes: ‘The eye is enticed by a path, and the mind’s eye also. The imagination cannot help but pursue a line in the land – onwards in space, but also backwards in time to the histories of a route and its previous followers’ (p. 15). Looking first to the second sentence of this statement, history has not been my concern in this project. By this I mean that in setting out to look for and to collect minor paths in and around Huntly, I have not been concerned with tracing their history or beginnings. Sometimes I have heard about paths from others, and there is an implicit history that goes along with recollection of a path walked-on. But while I am interested in the stories that people may attach to a minor path, my concern has been to find and locate minor paths, and to collect and document them.

The path by the Bogie that I walked on with my wife, and subsequently set about organising to re-claim in a group walking action, traces through Huntly history. The Bogie was the location of the bleach-fields, the brewery, up to seven mills and the dye works. There must be a fascinating social history attached to its banks. There are people who can tell us all about this, but I am not one of them. Rather, my concern is with the first phrase of the first sentence in my quote from Macfarlane: ‘The eye is enticed by a path’. The idea of walking a path (back) into existence is not new. Richard Long’s A Path Made By Walking (1967) is an iconic and hugely influential work of twentieth century art. It is also a significant point of contact for this event. Take a group of people and have them walk in single file back and forth along the line of the discontinuous path until a continuous line becomes visible in the ground. There is an emphasis, as with Long’s line, on walking as the means of producing the mark. There is an ephemerality attached to the process; a line made in the ground in this way will soon be reclaimed, in turn, by the undergrowth. Unless it continues to be walked.

A line on the ground is inviting, it shows a way taken before, represents a history, and legitimises and encourages the act of walking. By walking along this line in an organised event and, indeed, by referring to the walk as a path re-claiming action, my feeling was that not only would some people – some of the handful of participants – walk on this line for the first time, but that others might follow in the future. To produce a visible line at the Bogie Street end of the section, a line, however faint and however temporary, that might be seen by passers-by on the bridge, would entail, by way of a legacy, an invitation: an enticement to the eye, and ‘the mind’s eye also’. 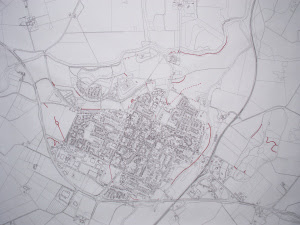 I want to say a big thank you to everyone who came for the reclaiming action. We walked in line back and forth three times over an hour and a half. The result was a clearly discernible path – a ‘trod’ Murray (Swapp) informed us later –  but for now I’ll stick to minor path.

We then gathered round in a circle of log seats under the trees and ate the delightful food that Daisy had prepared for us. We talked about paths, about the spectrum of path-making, about the relationship between path-making and art, about the potential to make future paths and the potential also for paths like this one to return to nature if no one walks them.
If the reclaimed path by the Bogie River is the legacy of this project and my contribution to the Deveron Arts’ Town Collection, then I like the fact that it is suspended, always with the threat of dissapearance. And yet, it may prove to be just that – a legacy. Maybe it will encourage someone to walk there. In this way, as with all minor paths, its future will be decided democratically, by the feet that walk it.


These posts are published as part of a year-long artist in residence, funded by Paths for All.