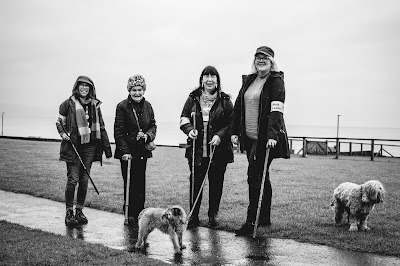 In autumn 2019 I took part part in a Studio Alec Finlay and Paths for All (PfA) project in Ayrshire. Alec is working as artist-in-residence with PfA, which co-ordinates volunteer-led walking groups across Scotland. One of these is run by Dementia Friendly Prestwick (DFP). Each Monday morning the group meets to walk along the promenade, before gathering at the Parkstone Hotel. They expressed interest in Alec’s work with PfA, and were keen to improve waymarking, signage for facilities (inc toilets), seating, as well as considering interpretation of the location, including personal memories and associations. 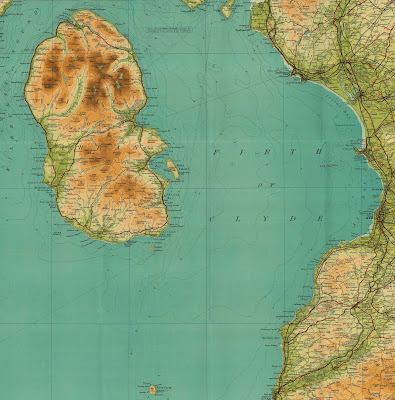 Alec and I drafted a proposal for the group, which outlined our initial thoughts about the site. “The defining character of the Prestwick seafront is the long extent of seawall and the presence of the sea… The beach runs from Bell Rock to Meikle Craigs, and the walker can look over to Arran. There is a sailing club, three golf clubs, and the railway runs just inland from the beach. The walk itself passes along a sea-wall that remains reasonably constant and gives a sense of time slowly passing. The artwork should unfold as a series of simple meanings experienced as someone walks in either direction.” 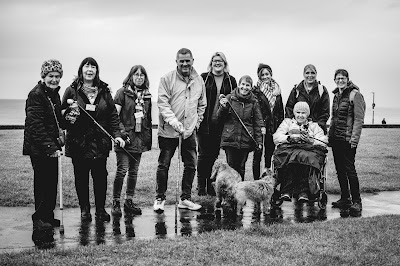 It was agreed that’d I’d join some of the Monday walks, and work with the group afterwards at the Parkstone. Alec and I visited Prestwick in August to meet some of the PfA folk, and DFP walk leaders Julie and Elissa. It was an overcast and windy day, and the Isle of Arran, across the Firth of Clyde to the west, appeared only fitfully.

After the meeting Alec wrote to me, ‘one form I’d like to try using in Prestwick is the compass, 4 “things”, sometimes thinking about the N-S and E-W alignment.’ We decided to focus on mapping, place-names, communal walking, and ideas for walking sticks, using some simple forms (such as the compass) for collecting people’s ideas and wishes. Alec also suggested Burns’ lines, ‘Of a’ the airts the wind can blaw, / I dearly like the west…’, which suggest an ‘airt’ (direction) can indicate not just places but also emotions.

I walked with the group on three Mondays in late October and early November. The weather was bright and windless, colouring the scene and highlighting Arran in ways it had been difficult to imagine on that August day. 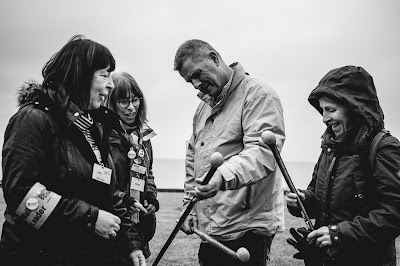 At our first session in the hotel, as a way of prompting memories and conversation, I read my poem ‘Forth’ about boats in Scottish waters over the centuries, Stewart Conn’s poem ‘Ayrshire Coast’, contrasting his childhood memories with a more recent visit, and some of Alec’s sentences on walking. People went on to speak about herring boats sailing out of Saltcoats and ships carrying explosives sailing from ICI Stevenston, Mancini’s café, the fact that being more sandy North Beach is better to sit on, the beach huts that used to be at the Links Rd end of the prom, windbreaks, the outdoor pool which was the largest in Scotland, the Boxing Day dip (which hasn’t happened in the past couple of years) and crazy golf, now gone, though the putting green is still outside the Parkstone. We also listed synonyms, Scots and English, for ‘walk’ – dauner, saunter, perambulate, amble, ramble, stroll, meander, wanner, roam, stomp, go on a jaunt…

Of a’ the airts the wind can blaw,
I dearly like the west,
For there the bonie lassie lives,
The lassie I lo’e best:
There's wild-woods grow, and rivers row,
And mony a hill between:
But day and night my fancy’s flight
Is ever wi’ my Jean.

At the second session, after I’d read Burns’ poem, we talked about the characteristics of  each ‘airt’, as viewed from here.

NORTH is coastal, and holiday resorts, a power station and a new town – Wemyss Bay (for the Rothesay ferry), Ardrossan (for the Brodick ferry), Troon, Saltcoats, Largs, Skelmorlie; the recently recommissioned Hunterston B nuclear power station; and Irvine, one of the four Scottish new towns created in the 1960s.

EAST is inland, mainly the airport, but also mining, the Pow Burn and POW camps. Prestwick Airport – a road ran through it, with cars and buses having to stop while planes took off; almost always fog-free, planes due to land at Glasgow or Edinburgh are diverted here; there was a viewing platform, and the only 24-hour restaurant in the area; the runway could take the largest planes, so at one time the only direct flights to Canada left from here; the nearby US military base; Concorde pilots were trained here, and staff could take trial flights, but they were so short people came off looking green; The Who’s Keith Moon’s frustration at a cancelled flight, which led to him spending the night in Ayr prison. There were many coal mines in the area, including Glenburn. The Pow Burn marks the marches or boundaries of Prestwick, and after World War Two many Italians who had been held in a POW camp at Whitlets (just north of the racecourse) stayed on and settled in the area.

SOUTH is Ayr, the county town, with its fishing port and harbour, and known for  its racecourse, its links with Burns, and its ‘lang mile’, 280m longer than a normal mile, which runs from the Citadel (built by Cromwell) along the front. At the Scottish Air Show, planes take off from Prestwick but the displays (including the Red Arrows) are over Ayr.

WEST is Arran, ‘the Sleeping Warrior’, presenting Scotland in miniature, and sheltering Prestwick from west winds. It evoked memories of holidays: stepping onto the ferry; grandfather on the beach in a three-piece suit; walking four miles each way for dancing at the weekend; sailing on the Waverley from Ayr to Whiting Bay. Holy Island in Lamlash Bay houses a Buddhist centre, and to the south is Ailsa Craig, once known as ‘Paddy’s Milestone’.

On my last visit, Alec came as well, and presented some of his ideas for the prom, including walking sticks, wind socks, viewfinders and weather vanes, the latter featuring ‘skylines’ taken from views of Arran and Ailsa Craig. Later Sam McDiarmid, a young photographer Alec has been working with, brought the painted walking sticks and photographed the walkers.

goodbye south
off you go east
back soon west

see you again
when you are
at your best

photographs by Sam MacDiarmid
poem by Alec Finlay, after the trad. Irish ballad 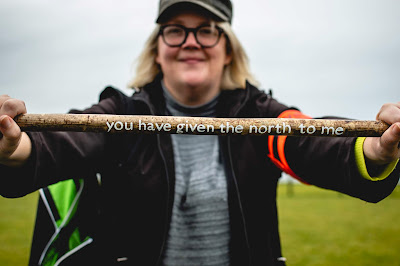 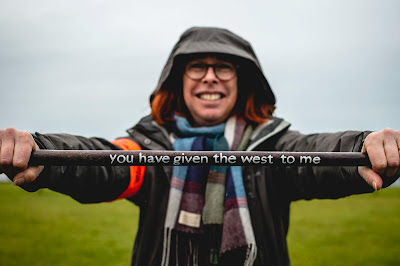 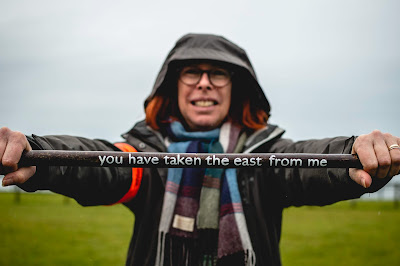 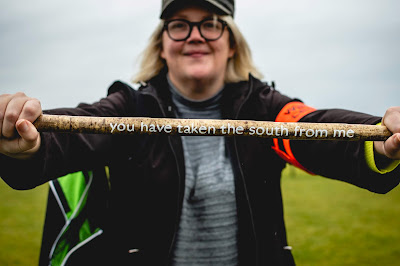 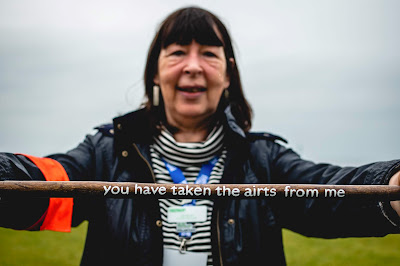 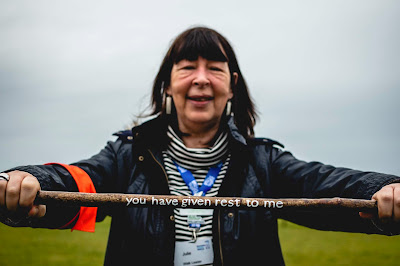 With thanks to everyone at Dementia Friendly Prestwick walking group, and Paths for All.

A further proposal for a permanent artwork by Alec is currently being developed.