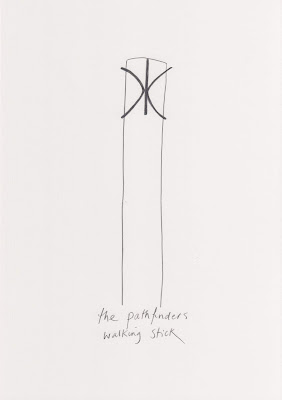 On a long drive north to visit Evanton Wood, passing through flurries of snow and spells of sun, Emma asked me if I ever made art 'for myself'. That's a complicated question to answer. Much of what we do for others is also done for ourself, whether that's out of kindness, a reflected sense of self-worth, or because we believe that social relations are a blanket that offers us security. 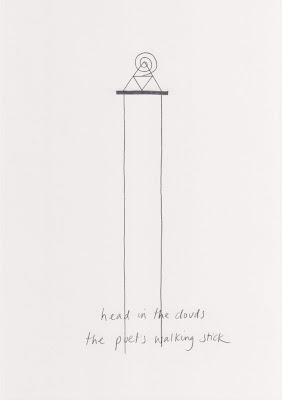 What our self is, well, that's complicated as well. We're relational beings. Gazing in the mirror doesn't give us access to our interior worlds, and the glinting reflections to be had on social media tend to distort.

In the same way that some people walk in order to keep themselves aligned with their emotional needs, or work through problems, some artists have a private practice which maintains them in their daily life. This may nurture a body of imagery, but it isn't the art they show in public.

a walk made in exchange
for an idea – that seems fair

There are sometimes things we write, paint, draw, or do that refresh the underwater spring which, in turn, keeps the river of art-making flowing. Not all art comes from making art. Sometimes the gears have to be disengaged.

a walk places our life
outside of our self

Thinkers walk because writing tables don't hold all knowledge. Sometimes we have to walk away from places of purpose and labour, to allow ideas to find us. 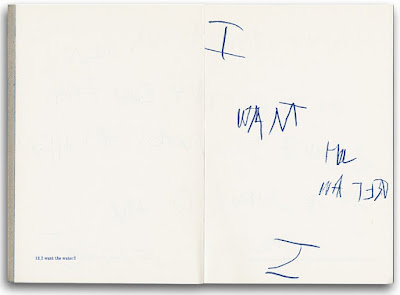 The example of such a practice that I always recall is Susan Hiller's automatic drawing, which she maintained long after she'd exhibited a body of drawings. I imagine it was the thing she trusted, like going into a dark cave and looking out, seeing the sunlit world all the more sharply. You go in the cave alone. 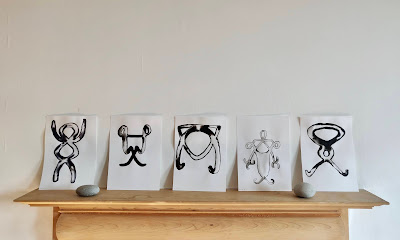 The key word that poets and artists will use here is practice. It’s no different to yoga, or any other mind-body activity. Some artists use Alexander technique, feldenkreis, gentle movement, dance, butoh, or meditation. These are ways to keep supple and ensure the mind recharges.

Often a purposeless walk is a means to discover a purpose.

Periodically, at times of life change, or crisis – they seem to go together – I’ve made daily paintings. As I explained to Emma, for these to be of help – of use – to me, they have to not be art. The drawings, which I make with ink and brush every morning and evening – or intermittently through the day, if that’s necessary – aren’t part of my work as an artist. If they were then I'd bring ambitions and anxieties to them which would direct and constrain. They aren't intended for showing or selling.

What I mean is: these drawings aren’t my job; they don’t have to succeed; they needn’t be any good; they may never be seen; and I don’t always know what they mean. If they did have to be art then they'd immediately belong in a different part of my mind. 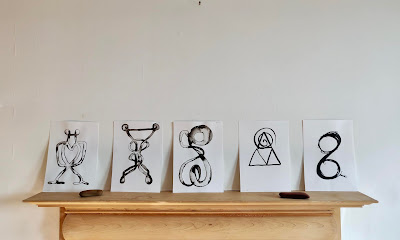 I think of this daily practice as a way to use intentionality, in order to heal, by allowing the not-conscious to emerge. I don't want to know how this works. I just know that it does. From August last year, when my wife left suddenly, I have painted in this way every day. I knew that I had to as there were feelings in me that had no other way to be released. 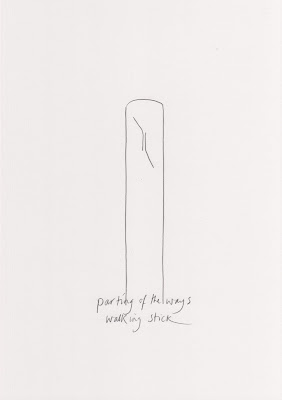 Sometimes the images that have emerged have been, or become, recognisable. And sometimes I can name and offer meaning to the images, or even write a poem about them. Still, I never assume that I know what’s being expressed in them. My interpretation makes no claim on them. 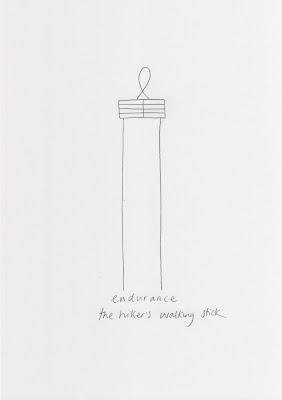 What I hadn’t expected was that a language of forms would gradually emerge. Looking back, perhaps it is inevitable that any practice becomes a way that the body's internal imagery will emerge.

The walking stick symbol sticks were made over one weekend in February. The idea that there was a body of images and figures which could become part of an artwork came on the Friday and they were all drawn out in pencil by Sunday night. On Monday I added the titles.

They use ideogram-like images, symbols and notations which came out of my painting practice or emerged in periods of writing that were part of the same process. A few refer to the I-Ching, such as the symbol for the hiker, the walk of endurance, a figure on a mountain.

The moment of confluence between an inner journey of healing and public project of artworks made for a artist residency with Paths for All wasn't what I had in mind, but it does made a kind of sense. 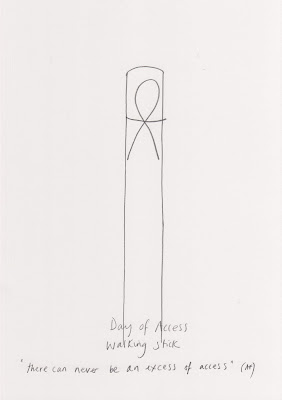 Everyone who walks knows that there are things that we feel able to share while our bodies are in motion, while we are alongside one another but not facing one another, that aren’t possible in other contexts. Walking makes for sharing. As Helen at PFA says, if she has a friend who is hurting then she takes them for a walk.

For people who work for the PFA organisation walking is their work and also, often, a personal practice. They have to guard against walking just being their work.

Walkers know that sharing company means as much, or more, than exercise.

you can think
while you walk

but don’t try to walk
while you are thinking

wherever you walk the mind
the thought will follow

This is what makes the concept of social walking so radical in its possibilities – it is both highly political and very personal. People march for change for a reason.

the aim of the best walks
is to change the world 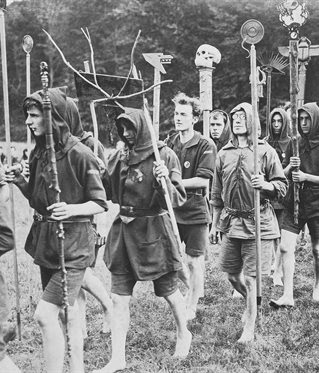 There’s an aspect of Kibbo Kraft and wandervogel at work in the new walking movement. The idealism of walking is reborn for every generation, and with it comes a symbolism, codes of dress, symbols of landscape, and the parade of psychogeographers, flaneurs, walking artists, and place-awareness. 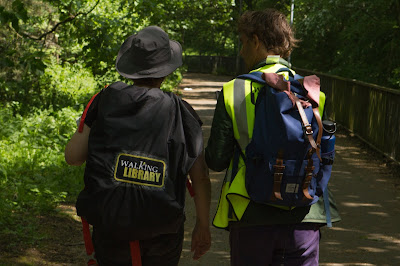 My symbol sticks are art, but they have their tongue planted in their cheek. They don't represent a body of beliefs or set of instructions. Some of the symbols will be familiar. The figures are invented and they pre-exist as cultural forms that live within us – the line, the swirl, the loop, all the forms that flow.

I did assign some of the symbols to projects that I am working on just now, such as Minor Walks – my equivalent of the PFA gentle walk – and Day of Access. There are also shout-outs to ecological movements, such as pinewood remediation – the pine-planting tribe, as I know it –  and forms which relate to my work with landscape and viewing, such as conspectus. 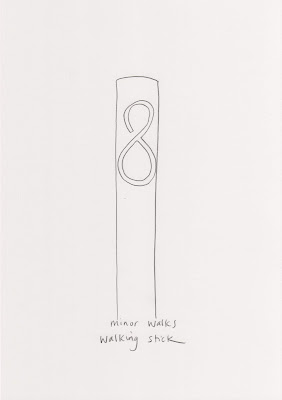 The sticks are a playful engagement with signs, which are the language of recognisable forms we share. Only, in this case, meanings aren’t fixed; people are welcome to reinterpret the imagery.

I wrote the meanings on, as titles or poems, after the symbols were drawn; they are interpretations that float over the drawings and could be erased.

There is also the fact that I love walking sticks as bearers of meaning. 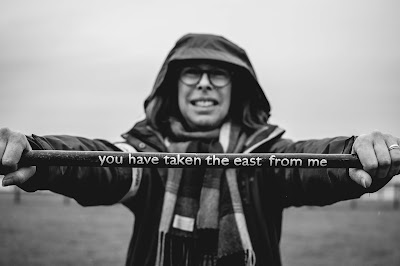 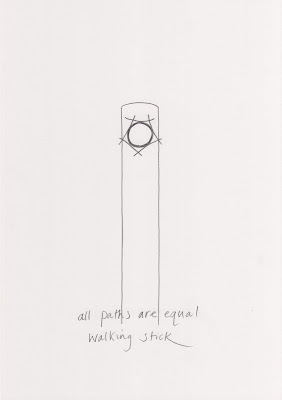 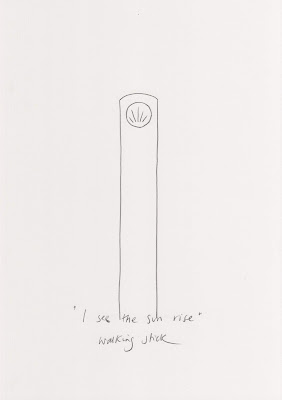 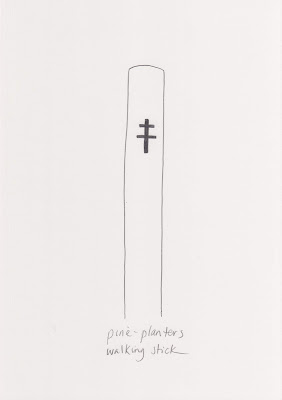 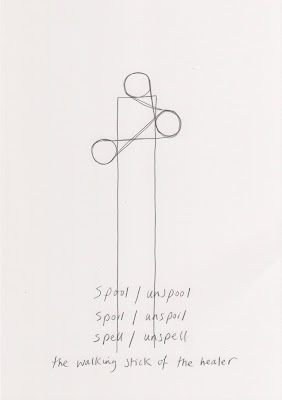 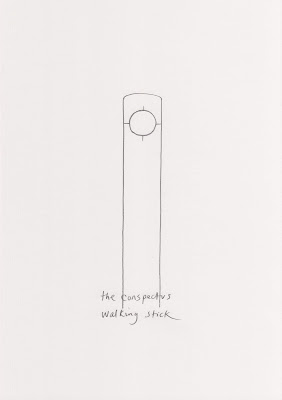 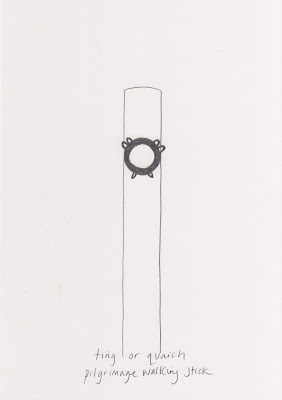 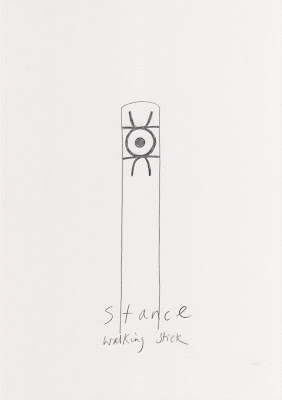 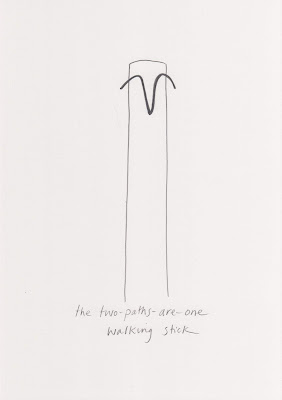 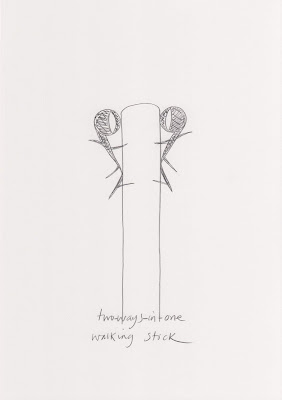